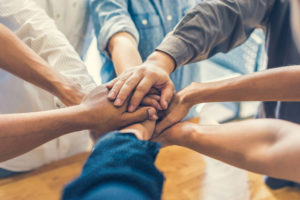 PURE is on a mission to address the urgent needs of the world’s children - one child, one classroom, one school, one student, one village at a time for the past four years. PURE is reinventing itself constantly yet staying mission focused to maximize the impact in mobilizing the power of giving against poverty. The vision remains unwavered - Education to Empower children and youth.

It all began with a call late at night from India, in February of 2016. The call was about a public school in the remote forest area of Khammam district of Telangana, India. The school that served poverty stricken tribal kids in Bhasitnagar hamlet needed many things out of which notebooks were on the top of the list. I was presented with the list and I said “yes” to notebooks for all 205 children. My elementary school classmates and I decided to pool our funds to take care of this. A few minutes later, the phone rang again, I was asked if I could donate towards plates as well. Sitting comfortably in my suburban home in St Johns Florida I said “how much more will you ask, I already said yes to books, pick one”.

It was not a polite “no” from me to my mother on the other side of the call. While I slept peacefully that night, thousands of miles away from me in the eighth grade classroom, the students who are first in their families to ever step foot in a school, were asked to choose between lunch plates and notebooks. The next morning on the way to work, I called back curious what the plates were all about having no clue about the state of the public school system in India. I was told that the school with two hundred plus children, more than half of whom survive on the free meal served at school, the only meal they get to eat most days – chose EDUCATION. The school hardly had forty plates to serve food to the famished children. Younger children who could not wait for their turn resorted to eating the watered down stew on the same plate at the same time! That was it, the life as I knew it changed! My childhood pals and I raised funds to completely transform the school. A school a few miles away reached out for support, making me think why not help more children, the children who chose Education to lift themselves out of poverty knowingly or not.

PURE – People for Urban and Rural Education came into existence officially on March 17, 2016. Three weeks from the first phone call that woke me up to the harsh reality of children’s lives and the weight of poverty they shoulder.

Our efforts sped up as request after request poured in from schools in villages near the first school. Then from schools far away and villages even more remote – villages by the sea, rivers, hills, valleys and forests. The requirements all had the same things, neglected schools with roofs leaking, lack of access to drinking water , toilets, benches, , school supplies and other amenities that we take for granted. There was another common thing too, the children who chose Education as a weapon against poverty!

More of my childhood friends came forward to join in the cause that we all suddenly found ourselves very passionate about, TeamPURE formed, the first pillar in the foundation PURE sits strongly on today. Reality of what we were up against was overwhelming with requirements piling up, the support that came from total strangers on social media in terms of funding balanced it boosting our confidence. The strangers who were donating became our back bone and remain so till date, PURESponsors – the strongest pillar of the four. The people who sent the requests for support became another one of our pillars, PURE Gurus, the teachers, our eyes and ears on ground. The core team of PURE works full time in our respective professions, we all are raising young children as well and we also took a pledge that the overheads would be less than 5% ruling out paid Directors or staff. This pledge leads us to our fourth pillar, PUREVolunteers. PURE is entirely run on a volunteer basis with an overhead of less than 5% reserved to facilitate transport for on ground volunteers and to keep the organization upfloat. Leveraging technology for communication, vetting process and project implementations PURE kept the promise of transparency and accountability with our USP being a quick turn around. You give me a $1 today, it will be spent on the child it’s meant for starting the very next day.

Expansion of the Programs

In December of 2016, I visited India. It was my first trip after PURE came into existence. The then only nine month young PURE was already seventy-five schools old. As I visited school after school, the sinking feeling that something was really off bothered me. There were more girls than boys in the public schools that offered free education. The gender disparity was right in front of my eyes, with families hardly able to put one square meal on the table and were sending male children to private schools. It was time for PURE to design programs that would level the playing field for the girls. Puberty was another strike against them as well, missing 3 to 5 days of school resulting in grades falling or dropping out of school from not being able to cope with it. PURE Femme , a program aimed at bringing awareness and facilititating WASH.

A highschooler who lived next door to me asked how he could help, that started PURE Youth, a leadership program that became the platform connecting ‘children who help children’. He submitted a paper on digital classrooms which over the next few months became one of PURE’s focus areas especially aiding rural schools where a single teacher teaches five grades. A caller on a radio show I was being interviewed on became an integral part of PURE taking the Youth program to the next level by scaling up by establishing 23 chapters across the USA as I type this. Then came the ‘Books to Bharat’ program which leveraged the ‘love of reading’ that children in the united states have by collecting their gently used books and filling library shelves in India. Youth ambassadors in Atlanta, Florida and Ohio took to it with zeal and filled over a hundred library shelves in India and Sri Lanka.

Similar stories of digging deeper into the challenges and getting closer to the issues faced by children in public schools led to PURE Sponsorships – which supports students’ higher education needs, living expenses for kids from single parent households, basic needs of children sheltered at child care institutions (CCIs), bicycles to ease the commute and thus prevent school dropouts. A Special Assistance program was designed to address the needs of physically challenged students thru fitting them with imported bio-prosthetic limbs, power wheelchairs, braille books , laptops, skill centers teaching music & computer skills and more. Special needs children and their needs are met through this program.

Partnering with others working in the same space expanded our reach . As new institutions and community groups linked up with us, what we have not even dreamt of became feasible with our collaborations helping children in Uganda, Nepal and Ethiopia. The power of collective action was proving itself as we partnered with various organizations which work exclusively on causes our multitude of program areas cover.

In 2019 we began our Women’s Day event. “IRYA – The Power That IS Woman” that created a networking platform for people working on empowering women and girls. The idea was to highlight the great work these social workers were doing, bring those working in remote areas into the limelight and in general to build each other up. It was the first time traveling alone to the city for some of the thirty three women we recognized at Irya, it was a small win that we all celebrated together. The proud smiles on their faces were worth it all.

In 2020, we took IRYA to the women’s doorsteps in rural India. Setting up an accessories business for a person with disabilities, supporting a biodegradable leaf making unit, innerwear for girls living in shelters and those attending public schools, launching a PURE branded sanitary napkin unit through a women’s self help group, supporting a women’s shelter with smart TV, sewing machines for tribal women, bicycles for girls and napkin incinerators for schools.

PURE Abhyasa, a street to school program, is a purely PURE owned program working to integrate street children into mainstream schools. Aimed at making children aged 6 to 12 who never stepped foot in a school ready for formal education, Abhyasa started in March. 2019. Nutrition, social skills, hygiene and learning are at the core of the Abhyasa program. This is the most challenging of all programs at PURE. The children are from households who are ino panhandling, rag-picking and living in dump yards.

Since the inception, donations have been in affordable amounts pooled from many donors. Crowdfunding and social media posts are the major source of funds with PURE Youth fundraisers contributing a quarter of the revenue. Employer gift matching grants are also a source of funds. PURE receives grants from other non-profits as well. Every fundraiser or contribution is project-specific. Saying “No” to funds once a project fund goal is met is what our sponsors appreciate about PURE.

The leadership team is committed to not just doing good, but being a force for good. Our promise to serve local communities in the USA and the needs of the world’s children will continue with YOUR support.

Thank you for your willingness in becoming a part of our story, the journey of PURE.

We Need Your Support

In Case of credit card ,Transaction in Doller($) will be accepted.